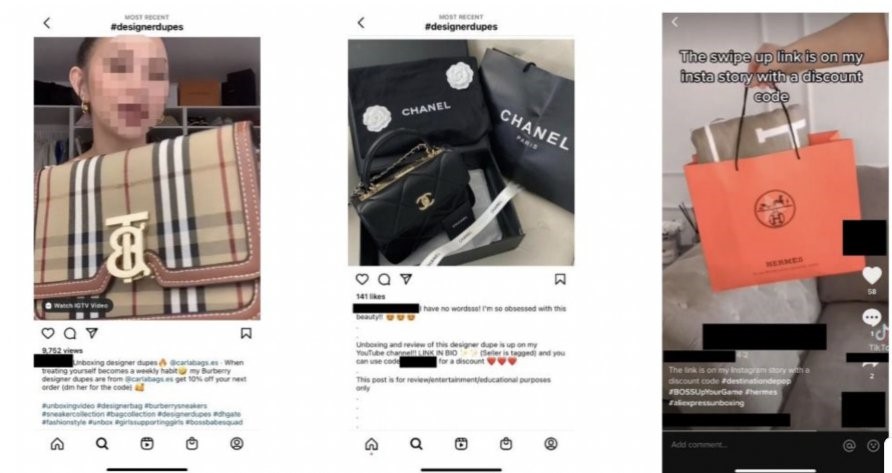 The Milan Fashion Week is back and so is our fashion law column. As usual, in this series of articles (one for each day of the MFW) we will highlight those that in our view are the main trends in fashion from a legal perspective and, while it remains an all-female initiative, for this new edition we are happy to welcome on board also our colleagues from our corporate team. We thus hope you will enjoy our return as much as that of fashion shows and cocktail parties!

After mega, micro and nano influencers it is now the turn of dupe influencers, which in the last months have been taking over all the main social media and especially those mainly used by the Gen Z. In fact, if one side the Gen Z seems to care more about the environment and sustainability more in general, on the other side teenagers do not look willing to invest significant moneys to buy their luxury dream clothing and accessories.

Nothing new so far since fakes have always been around and this is a long lasting battle for fashion brands, but the difference is that while traditionally one did not want to make public disclosure and tried to pass off the knockoff for the original item, there is now a new category of influencers who are advertising the sale of fake items and are building their career on dupes.

According to a study conducted by Ghost Data and reported by Highsnobiety, from June to October 2021, only Facebook and Instagram hosted a total of more than 46,000 active accounts operated by counterfeiters, benefiting from features such as direct messages visible only once and 24-hour Instagram Stories that make it significantly easier for users to peddle fake designer goods without leaving a trace.

Further, hashtags like #dupe, #designerdupe and #fashiondupe are among the most popular and some influencers in their posts discuss how to make and sell dupes and show the ones they bought to rate them. In addition, a refined scheme was recently discovered whereby influencers on their accounts provided links to the listings available on a marketplace, that featured a non-infringing generic item, and after buyers placed an order for the generic item, they received instead a luxury counterfeit product in return.

Social media are thus considered the key markets where counterfeit goods are currently sold to the general public. This led to the rise of dupe influencers and brought back into the spotlight the issue of the liability of social media platforms, which from a legal perspective are compared to marketplaces like e-Bay and Amazon.

Under Italian law, pursuant to article 17 of Legislative Decree no. 70 of 9 April 2003, which implemented the E-commerce Directive 2000/31/EC, as hosting providers, social media platforms and marketplaces do not have a general obligation to monitor the lawfulness of the content published by users on their platform. However, upon notification by the rights holder, they have the obligation to take action for the removal of unlawful content when its infringing nature is evident.

Moreover, in its decision of 3 October 2019 in case C-18/18, the EUCJ held that Internet Service Providers may also be required to remove contents equivalent to those found to be unlawful. Therefore, the platforms can be requested to remove any other fake item with the same characteristics (i.e. including the same infringing content) as the contested dupes.

To this end, the main social media platforms and marketplaces have adopted a notice and takedown system, enabling rights holders to ask the removal of the infringing items directly through the platform by including the relevant URLs.

Furthermore, given the fast and wide-reaching grow of the phenomenon, the American Apparel & Footwear Association (AAFA) recently released some guidelines to combat dupe influencer content. In particular, according to AAFA’s recommendations the following actions shall be taken:

This is only a first step but it makes clear that influencers, consumers, online platforms, and brands shall all play their part to raise awareness on the health, product safety, environmental, and labor concerns related to the production and distribution of counterfeits. So remember that dupe influencer is currently a (bad) trend on social media platforms but such trend has many negative impacts and most of such influencers actually crave for the original items, which remain much more fashionable!

If you would like to know more about this topic and fashion law in general, please contact valentina.mazza@dlapiper.com.