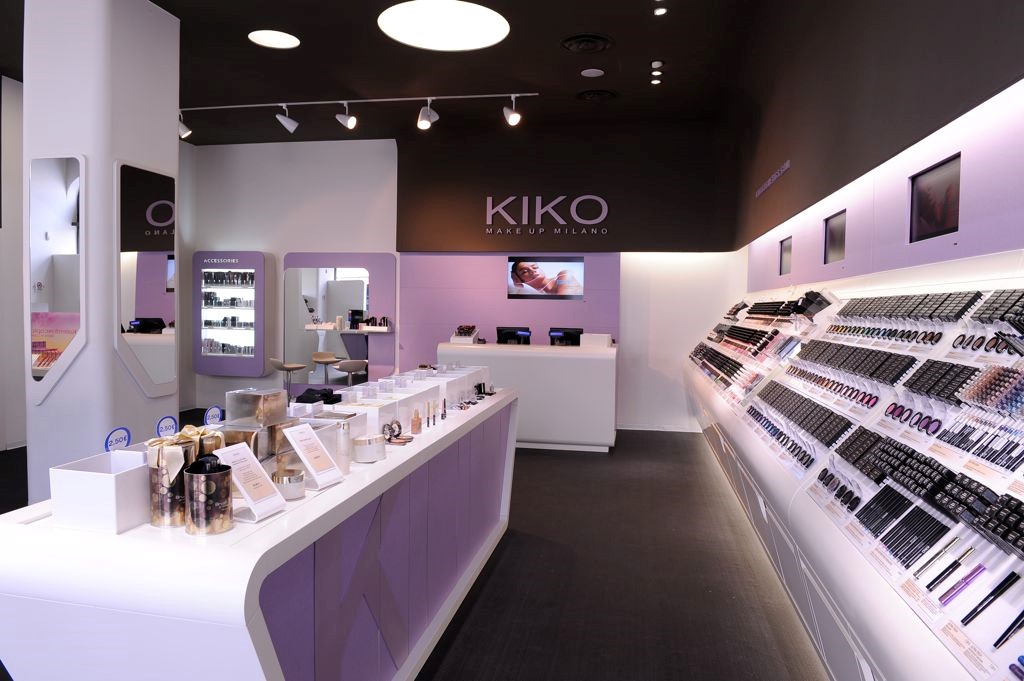 By Valentina Mazza and Andrea Michelangeli

In our fashion law predictions for 2020 (available here), we anticipated Italian case-law following the trend set by the CJEU in the Cofemel decision (for the illustration of the case, see our previous post here) by making it easier to access copyright protection in Italy. No magic wand, but a few weeks ago the Italian Supreme Court first analyzed its implications under Italian law in the decision No. 8433/2020, which put an end to most of the challenges concerning the long-lasting Kiko-Wycon saga.

The lawsuit was brought in 2013 by the cosmetic company Kiko S.p.A. against its competitor Wycon S.p.A. for copyright infringement and unfair competition on the ground that it copied its signature store layout (e.g., the open space entrance with digital screens, the white/black/pink/purple color combination, the disco lighting effects, the size, proportions, materials and position of furniture). After that Kiko’s claims were mostly granted both in first instance and on appeal, the case made all the way up to the Supreme Court.

Interestingly, the Court took the chance to bring some clarity on the different kinds of IP protection which a store layout can be granted, including copyright protection. Everyone has probably noticed that be it in Milan, Shanghai or New York, when you enter a shop to buy the new iPhone, a Louis Vuitton bag or a Tiffany bracelet the look and feel of the shop is always the same. In fact, together with the products packaging, the store perfume and sales personnel’s clothing, the store layout is the ultimate feature which most companies rely on in building their brand recognition.

According to the appellant, Kiko’s store layout could not be considered as an “architectural work” for the purpose of art. 2, no. 5 of Italian Copyright Law (“ICL“) on the ground that the architectural project did not design a defined and fixed layout to be reproduced in all Kiko’s concept stores, but it could eventually be regarded only as an “industrial design” made-up by the combination of the single components of the store under art. Art. 2, no. 10 ICL, which imposes the additional requirement of “artistic value“.

The Supreme Court thus first noted that architecture is by definition a form of “applied art” but this does not mean that the work for which copyright protection is sought must be physically incorporated and inseparable from the building for which it has been designed. Further, recognizing that architecture is deemed to encompass also interior design, the Court found that Kiko’s store project had a specific expressive form which included “a series of elements, whose choice, coordination and arrangement displayed the required creative character“. The same was already established in relation to the interiors and layout of yacht boats, which were protected under Art. 2, no. 5 ICL (Court of Venice, 17 February 2018 and Court of Genoa, 27 June 2018).

While addressing the issue of copyrightability of architectural works, the Italian Supreme Court expressly cited the Cofemel decision to specify the requirements of copyright protection under Italian law. In fact, it noted that as long as it can be qualified as a “work” and such work presents a sufficient degree of originality, no other requirement is necessary in order to access copyright protection. According to the Supreme Court, in fact “The CJEU has confirmed that, with respect to copyright protection, the originality requirement, i.e. the subsistence of a well-defined and creative expressive form which reflects the free choices and personality of its author, does not also imply that the work creates a visually relevant effect from an aesthetic perspective, as it is instead required for the purpose of design protection“.

As a consequence, the Court clarified that the aesthetic and visual effect of an item should not be considered for the purpose of copyright protection, for which it is sufficient that it reflects the personality of the author, but it can eventually lead to the different regime of design protection. However, since it qualified the store layout as an “architectural work” and it did not apply Art. 2, no. 10 ICL, the Supreme Court missed the chance to finally rule on the compliance of the “artistic value” with the InfoSoc Directive. Therefore, the issue remains open to the Italian legislator.

As of today, not only Kiko and Wycon, but a variety of players from fashion maisons to renowned football clubs have registered their retail store layout as a design, both at national and EU level. Such registrations often include not just the overall look of the concept retail store involved, but also other characteristic elements such as the internal shop ornamentation and decoration, the shape and position of specific furniture placed in the store, as well as the external store entrance and facade.

With regards to the Kiko-Wycon dispute, following straightly the conclusions reached in Cofemel and already stated in the seminal case Flos-Semeraro analyzed by both the CJEU (C-168/09) and the Court of Milan (judgement of 12 September 2012, No. 9906), the Supreme Court recognized the possibility of cumulation between copyright and design protection, since they are subject to different requirements and aimed at different purposes. In fact, while design protection is intended to protect objects which, although new and individualized, have a utility character and are intended for mass production but only for a limited time sufficient to recover the investments for the creation of such objects, the protection granted by copyright has a significantly longer duration and is reserved to objects which display a higher degree of creativity.

Therefore, the circumstance that Kiko had registered its store layout as a community design does not preclude the same concept layout to be granted copyright protection. However, in this instance Kiko did not enforce its design registrations and the Court thus did not have to decide on the issue of the design infringement.

As recalled by the Supreme Court, a particular store layout is also entitled to trademark protection. Indeed, in 2014 in Apple Inc. v Deutsches Patent und Markenamt (C-421/13) the CJEU found that a representation that depicts the layout of a retail store through an integral collection of lines, curves and shapes, may successfully constitute a trademark provided that (i) the representation is capable of distinguishing the goods or services involved, and (ii) the depicted layout departs significantly from the norms or customs of the retail sector concerned. With this decision, the Court also found that the layout of the flagship stores of a manufacturer of goods may lawfully be registered as a trademark also for services, but only in case such services “do not form an integral part of the offer for sale” of the relevant goods.

In Apple, the CJEU further clarified that the criteria to be assessed in order to grant trademark protection to a store layout should not differ from those used in relation to other types of trademarks. This is exactly what the EUIPO Board of Appeal did when it refused the three-dimensional shape trademark application for the store layout of Kiko itself in 2016 for lack of distinctive character.

In its decision, the EUIPO has confirmed that in order to assess trademark protection to a store layout the relevant “combination of various characteristics of lines, shapes and colours” must be examined. As regards the Kiko store layout, the EUIPO Board of Appeal eventually found that the overall impression of the store layout, corresponding to a general rectangular shape of the forms involved, was not in itself able to carry out a distinctive function in the design of a cosmetics store, as this only “allows to place a large number of exhibitors seamlessly, thus making the most of the side walls“. Further, the EUIPO highlighted that “the colours employed are common (white, black, grey) or allude (with respect to the colour lilac) to the cosmetics sector“, concluding that none of the characteristics of shape, line and colours deviated significantly, alone or in combination with the others, from the uses and standards of the product retail cosmetics industry.

In general, the imitation of a competitor’s concept store layout in its different facets may amount also to an act of unfair competition as a form of slavish imitation, misappropriation of values and – if combined with other imitative behaviors – parasitic competition under Article 2598, no. 1, 2 and 3 of the Italian Civil Code.

In the dispute at hand, the first instance and appeal decisions found Wycon liable of parasitic competition against Kiko, on the ground that – in addition to the imitation of the store design – it engaged in several others behaviors, including the imitation of (i) the saleforce’s clothing, (ii) the overall visuals of products sold, (iii) the appearance of products’ bags and cases and (iv) the overall commercial communication outline, which were judged to have been performed with the clear intention to “constantly follow the footsteps of the competitor“.

However, a final decision on this matter is still yet to be reached, as the Supreme Court recognized that the Milan Court of Appeal omitted to rule on the facts and exceptions submitted by Wycon to support its position concerning Kiko’s unfair competition claims. Therefore, since the Italian Supreme Court is seized exclusively on the correct interpretation of the law, the Milan Court of Appeal in a different composition has now been seized to assess whether Wycon’s imitating behaviors, taken singularly or collectively, do actually mark as an unfair competition act under Italian law. Therefore, the saga has not fully ended yet!

After the case brought by Yves Saint Laurent against Zadig & Voltaire for allegedly copying its Paris boutique, this case and its mediatic echo, both inside and outside the legal arena, show the importance that store design has for fashion houses, which invest significant resources to design and develop a layout which mirrors their style and becomes a distinctive feature of the brand. Therefore, fashion houses are taking measures to protect it and it will be no surprise if more litigation on this matter will arise in the next years.

If you would like to know more about this topic, and fashion law in general, please contact valentina.mazza@dlapiper.com and andrea.michelangeli@dlapiper.com.

View all posts by valemazza →