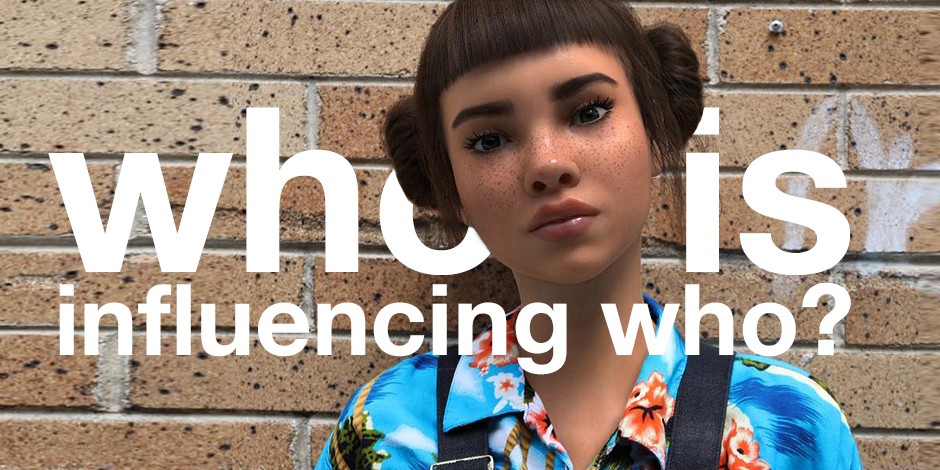 There is a new crop of influencers in town and – read carefully – they are not real people.

Virtual influencers – influencers who are not human, but rather are CGI creations or robots – are the latest trend on social media. CGI stands for “computer-generated imagery” and it is a technology that creates pictures through the use of computers, now applied to create the new trend of virtual – but realistic – Instagram influencers and models.

In particular, the top 4 leading the group are Miquela Sousa, Bermuda, Shudu and Sophia the Robot.

On the top of Instagram CGI influencers there is Miquela Sousa – also known as Lil Miquela by her Instagram followers – who (or “which”?) is a virtual robot or a digital avatar designed by Brud, a Californian start-up specialized in robotics and artificial intelligence. Lil Miquela, who has over 1.5 million followers, is 19 years old IT girl living in Los Angeles with the passion for music and fashion.

Lil Miquela’s account has been recently hacked by her rival Bermuda, a Trump-supporting Instagram influencer who forced Lil Miquela to “tell the world the truth” about her nature of CGI creation. With her attack, Bermuda solved a part of the mystery on Miquela’s nature and creators, even though the exact reason behind Lil Miquela’s and Bermuda’s accounts is not yet clear. In fact, the two CGI girls are now friends a no one has really understood the previous “querelle” between the two new friends.

Joining Miquela on this new trend of digitally manipulated influencers is – in addition to the blonde, blue-eyed pro-Trump Bermuda – Shudu, also known as “the world’s first digital supermodel“, who was created by the fashion photographer Cameron-James Wilson using 3D modelling technology. Shudu’s account went viral when Fenty Beauty reposted an image of Shudu “wearing” the brand’s Mattemoiselle lipstick. From that moment on, she featured on the cover of Hypebeast, in the pages of V Magazine wearing the latest trends of Balenciaga and Kenzo. Recently she appeared in Vogue and she was named one of the most influential people on the internet by Time. Also, Balmain announced Shudu as one of the CGI models who takes part – together with Margot and Zhi – in its new “Balmain Army” showcasing the latest designs from its BBox line.

Another AI creation comes from Hanson Robotics – a Hong Kong–based engineering company – which gave “life” to Sophia, the IT girl robot. Sophia was the first robot sat in Alexander Wang’s front row wearing Wang’s boxy blazer style, with metal safety pins forming hearts on both of her sleeves, and the Axel Rose–type bandana around her neck, an accessory that also made an appearance throughout the show. In videos shared on Instagram, Sophia can be seen swiveling her head as models. As an artificially intelligent robot, Sophia can automate, learn and synthesize information, thus taking on a life of her own. She interacted with real-life celebrities like Will Smith, Cristiano Ronaldo and Chrissy Teigen, and posed for the covers of Cosmopolitan India and Elle Brazil. In October 2017, she became the first robot in the world to be recognized as a citizen in Saudi Arabia.

2. Why is AI in the fashion industry interesting for brands?

It is clear that CGI and robotic influencers and models present a new dynamic for the influencer marketing industry, offering several advantages and benefits to brands interested in testing out virtual influencers.

One of the reason for such a choice is that virtual influencers and models can adapt to each contest and they do not generally behave in a way not consistent with the brand identity given that everything such virtual influencers do is controlled by the people managing their accounts. In light of the above, in the near future, many fashion brands may begin building their own digital influencers in order to better control the message they communicate to their target audience. And human influencers, too, may begin embracing CGI alter egos to protect – with the same mechanism – the relationships with their existing sponsors.

Artificial Intelligence is therefore an industry that is growing by the minute, having its impacts on both business and – more broadly – on the whole society. However there are numerous legal issues that have to be taken into consideration, among which (i) from a consumer point of view, the non-compliance with advertising laws, (iii) the necessity to adopt cyber resilient systems in order to protect AI from any cyber-attack, as well as (iv) the need to take ethical issues into the right consideration from a legislative point of view.

(i)     The non-compliance with national advertising laws

Last year, a number of local legislators – for instance the US Federal Trade Commission but also the Italian Istituto Autodisciplina Pubblicitaria – updated endorsement guides to require influencers to disclose marketing relationships and identify paid posts with a hashtag like #ad or #sponsored. However, it is not yet clear how those rules would apply to influencers who are not human.

At the moment Lil Miquela is shrouding herself in mystery since she said that she has never been paid to wear clothes but that she gets sent “free stuff” from brands. However, after the appearance at Prada fashion show and after campaigns for Diesel and Moncler, she has now deals with Chanel and Fendi. We can expect that, in such cases, fashion brands will recognize a fee for Lil Miquela’s promotional activity.

Given that transparency has been an ongoing issue for influencers, it is perhaps in the best interests of CGI influencers to play by the same rules as their human counterparts. However how would enforcement action work with regard to a non-human influencer? Due to the lack of a specific legislative provision on this point, the application of the relevant laws might result to be difficult.

Also due to the fact that CGI influencers are often based AI systems, it is necessary to take into right consideration cyber risks (such as the cyber-attack Lil Miquela suffered from Bermuda). Provided that AI is generally empowered to make deductions and decisions in an automated way – without day-to-day human involvement – a potential disruption deriving from a cyber-attack can result to be undetected for a long time with dangerous consequences for both the influencer as well as the brand represented by the influencer.

In this context it is essential for companies within the AI industry to build the relevant AI system as cyber resilient. But it is also important to adopt incident response schemes able to remediate adverse impacts on the business and to protect the brand reputation, as well as post-incident remediation plan which can mitigate the impact from any claim or other liabilities.

(iii)  Ethical rules for CGI influencer and, in general, AI

Finally, AI systems cannot be properly implemented without taking into consideration measures aimed at avoiding any unintended consequences. In fact, while Lil Miquela has used her power for good, encouraging her followers to donate to Black Girls Code and be better allies to transgender people – for whose rights she even wrote to Congress in the US –  it is not hard to imagine another CGI using its influence to spread hate or political discord.

With this regard the European Commissions’ High Level Expert Group on Artificial Intelligence (the “AI HLEG”), issued – on December 2018 – its first draft of Ethics Guidelines for Trustworthy AI, of which a final version is due in March 2019 (the “Guidelines”). The goal of the Guidelines is to guarantee “a human-centric approach (…), forcing us to keep in mind that the development and use of AI should not be seen as a means in itself, but as having the goal to increase human well beings“.

The above mentioned Guidelines are – for now – addressed to all relevant stakeholders developing, deploying or using AI, however governments will also have a key role in this context. In fact policymakers and regulators are called to ensure that economic and social impacts of AI are properly managed and that ethical issues are taken into the right consideration from a legislative point of view. With this regard, it will be interesting to have a look at the second deliverable of the AI HLEG – the Policy and Investment Recommendations – which is due in May 2019.

In light of the above, every day the need for a regulation on CGI, robots, virtual influencers, and – above all – the AI and social media sphere is more pressing. With this regard some expert are pushing towards a global regulation for influencers which would require the identification of sanctions applicable on influencers across the “web” in order to have a common regulation for human and fake influencers.

For now, let’s see what Miquela Sousa, Bermuda, Shudu and Sophia the Robot have planned for us all.